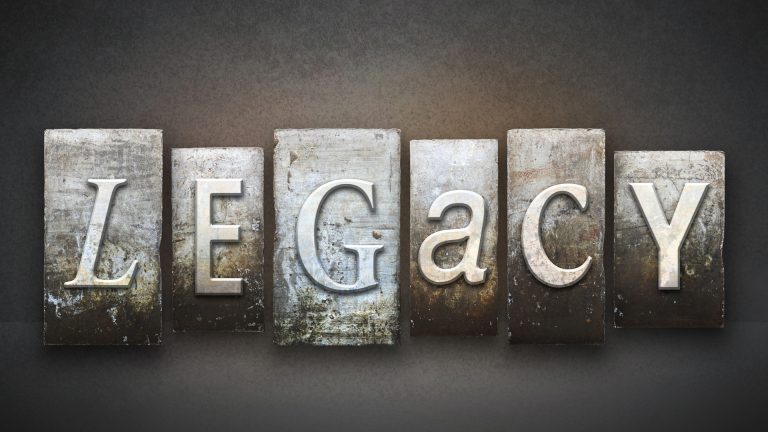 
What is your legacy? What are you leaving your kids?

Jacob, now Israel, has come to the end of his life. We read in today’s passage of his final days. At the end, he wishes to perform his last responsibilities as patriarch. Joseph has brought his sons to Jacob to receive his blessing. I want to share with you a couple of excerpts from James Montgomery Boice’s commentary on this event.

“Happy is the life that begins and ends with God! Blessed is the testimony that sees all life from that perspective!

This was not always the case with Jacob. Earlier in his life Jacob had been more noted for his neglect of God than for his attention to him. In fact, the first time the name of God was found on his lips he was lying. He had been pushed by his mother to impersonate his older brother Esau to gain Isaac’s blessing. So he dressed in Esau’s clothes, covered his arms and the smooth part of his neck with goatskins, and then came to his blind father bearing the kind of tasty food Isaac liked and which he had sent Esau to prepare. His father was suspicious about his quick return. “How did you find it so quickly, my son?” Isaac asked.

The next time Jacob mentioned the name of God was at Bethel, where God gave him the vision of a great stairway reaching from earth to heaven. Jacob was frightened on this occasion. He said, “Surely the Lord is in this place, and I was not aware of it. How awesome is this place! This is none other than the house of God; this is the gate of heaven” (Gen. 28:16–17). Two chapters later Rachel is chiding Jacob because she did not have children, and Jacob was angry. He said, “Am I in the place of God, who has kept you from having children?” (Gen. 30:2).

In all these chapters Jacob shows a nodding acquaintance with God and a dependence on the promises of God received at Bethel. But we cannot feel that he was really close to God. He seems never to pray. He is always trusting in his own cleverness rather than waiting on God’s sovereign direction of his life.

At the end this had changed. Jacob had not always been close to God, but God had been close to Jacob. He had called him at Bethel, and he had directed his paths and fulfilled his promises to him for all the many long years in which he raised his family and eventually settled them in Canaan. Jacob recognized that now and wanted to give testimony to it. So he began his testimony with God: “God appeared to me at Luz,” and he ended it in a similar manner: “Now God has allowed me to see your children too.”

This is what Jacob wanted to pass on to his children. He was right to want this. Is it not sad that so many people try to pass on almost everything else and neglect this one thing that alone is of eternal importance? We try to leave our children well situated in life, with good educations, useful friends and contacts, and sometimes good bank accounts or other assets. But these can perish overnight. It is the knowledge of God and faith in God that alone remain.

The commentator I mentioned earlier wrote of Jacob: “[He] wished his sons to have, as their last memory of him, the scene in which he gave God all the credit, all the glory. This would enable them to stand firm in the days of slavery and in the furnace of judgment. The greatest legacy any man can leave to his children is unswerving faith in God and the memory of a testimony that gave God all the glory and witnessed to his unchanging faithfulness. God says that he is not ashamed to be called the God of Jacob because in this scene the spirit triumphed over the flesh and God was acknowledged as all in all. When our earthly inheritance is gone, when lands are eroded, stocks depreciated and money spent, the legacy of unwavering faith in God will be the most that we can pass on to our children.”

My parents did exactly this on the occasion of their fiftieth wedding anniversary. The children and grandchildren had collected from various corners of the country: the Northeast, Alabama, California. All were there—the children, their husbands and wives, and the grandchildren. We had a dinner. My sisters gave remembrances. I gave a tribute. Then my parents spoke and testified to the faithfulness of God throughout the long years of their lives together. My mother in particular shared three passages of Scripture:

Psalm 91:14–16: ” ‘Because he loves me,’ says the Lord, ‘I will rescue him; I will protect him, for he acknowledges my name. He will call upon me, and I will answer him; I will be with him in trouble, I will deliver him and honor him. With long life will I satisfy him and show him my salvation.’ “

Proverbs 3:5–6: “Trust in the Lord with all your heart and lean not on your own understanding; in all your ways acknowledge him, and he will make your paths straight.”

My mother concluded by saying, “I want you children especially to remember that your grandparents were Christians and that we tried to serve the Lord Jesus Christ together faithfully for fifty years. We found him to be faithful. He has never failed us.” Can you think of any legacy greater than that? There is nothing so honoring to God as faithful testimony.”

Brother, what legacy are you leaving your kids?