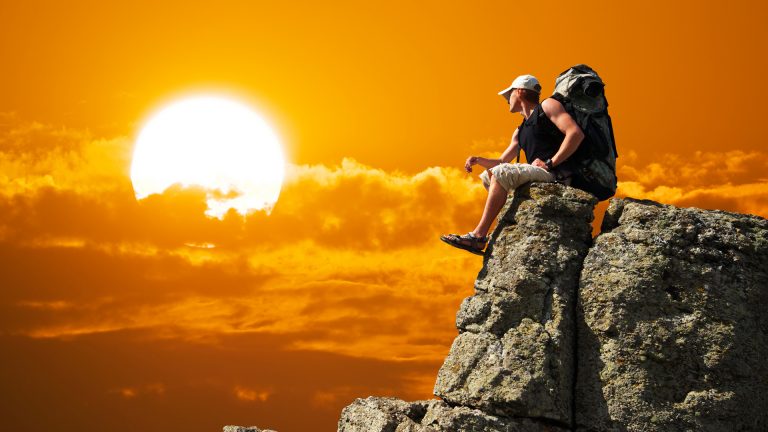 
You can live your life your own way, separated from God, or you can sojourn with God and enjoy the blessings only He can provide.

Once again there is much we could discuss about today’s reading. We read of Jacob stealing his father’s blessing from his brother Esau. We get an inside look at the bitter results of family division and the cost of parental favoritism. We also see that Isaac repeated the sins of his father in that while settled in Gerar, he told people is wife was his sister because he was afraid of people killing him in order to take her to themselves. There must have been a lot of that going on back then for both father and son to fear it so much, but what we see is that the sins of the father are often practiced by the son – a lesson for each of us to keep in mind. Our children see how we behave; we are their example. We shouldn’t be surprised when they grow up and make the same mistakes. Let us govern our behavior for good so we will pass on a legacy of good.

Of all the nuanced thoughts that today’s reading brought to mind, however, one in particular captured my imagination. At the very beginning of our reading today, we read that there was a famine in the land, just as there had been in Abraham’s day. Abraham had gone down to Egypt to find sustenance during that famine. Nowhere in the biblical account do we read of God telling him to do so. It was during this trip to Egypt that Abraham told his lie about his wife being his sister; one of two such occasions. God specifically told Isaac, however, not to follow in his father’s footsteps. He told Isaac to stay in the land He was giving him and that He would bless him in that place.

Genesis 26:1-4 ESV
“[1] Now there was a famine in the land, besides the former famine that was in the days of Abraham. And Isaac went to Gerar to Abimelech king of the Philistines. [2] And the LORD appeared to him and said, ‘Do not go down to Egypt; dwell in the land of which I shall tell you. [3] Sojourn in this land, and I will be with you and will bless you, for to you and to your offspring I will give all these lands, and I will establish the oath that I swore to Abraham your father. [4] I will multiply your offspring as the stars of heaven and will give to your offspring all these lands. And in your offspring all the nations of the earth shall be blessed'”


What I take from God’s statement is the following lesson: don’t go looking for your own solutions apart from God, don’t leave God’s presence to do things your own way, stay in right relationship with Him, for that is where the blessings He has promised you can be found. Abraham went to Egypt because it seemed to him a wise choice in the face of a famine. God didn’t tell him to go there, and while away from where God had told him to be, he sinned. Oh, he profited from his sin, but that doesn’t mean he didn’t lose something far better in the bargain. There is no telling how God might have blessed him if he had stayed where God had directed him.

Later in his life Abraham seems to have realized this. When he sent his steward to find a wife for his son Isaac from among his own people he said, in essence, “whatever you do, never take Isaac away from the Promised Land”. The Promised Land is where you find the many wonderful blessings of God. In a spiritual sense this Promised Land is in God’s presence. God said, “dwell in the land of which I shall tell you – sojourn there and I will be with you and will bless you”. To sojourn means to live with. God is saying live your life in my presence and there you will be blessed.

Brothers, our whole purpose in being is to sojourn with God, to live with Him for eternity, basking in His glory. This is Heaven, being with God! Why would you want to be anywhere else? Do yourself a favor; sojourn with God!

Who Are You Seeking To Serve?