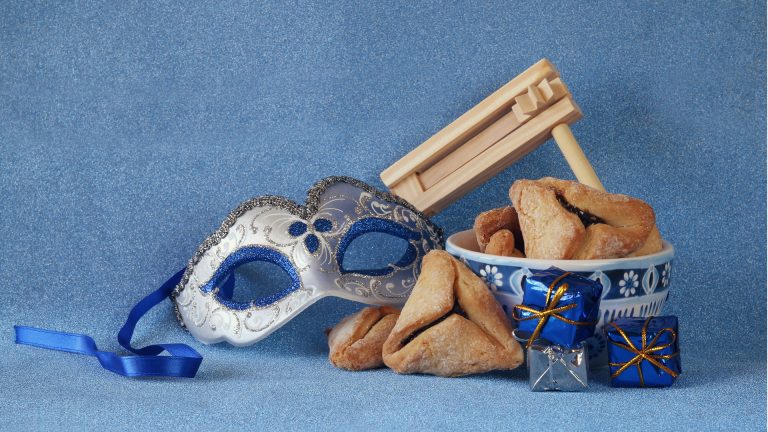 The festival of Purim is a celebration of the salvation of the Israelites in exile still celebrated by Jews around the world to this very day.

I have been honored to have many Jewish friends in my life.  I have been further honored when they allowed me to observe and participate in some of their religious celebrations.  Of course, most of their religious practices are a mystery to me, but I hope that as I continue to study the Bible I will learn ever more about such practices.  One of the festivals my Jewish friends celebrate is Purim.  The story of Esther, in fact, is really the story of how the feast of Purim came into being.

Esther 9:23-28 ESV
“So the Jews accepted what they had started to do, and what Mordecai had written to them.  For Haman the Agagite, the son of Hammedatha, the enemy of all the Jews, had plotted against the Jews to destroy them, and had cast Pur (that is, cast lots), to crush and to destroy them.  But when it came before the king, he gave orders in writing that his evil plan that he had devised against the Jews should return on his own head, and that he and his sons should be hanged on the gallows.  Therefore they called these days Purim, after the term Pur. Therefore, because of all that was written in this letter, and of what they had faced in this matter, and of what had happened to them, the Jews firmly obligated themselves and their offspring and all who joined them, that without fail they would keep these two days according to what was written and at the time appointed every year, that these days should be remembered and kept throughout every generation, in every clan, province, and city, and that these days of Purim should never fall into disuse among the Jews, nor should the commemoration of these days cease among their descendants.”

Thousands of years later, the Jewish people continue to celebrate Purim, the days of their deliverance from the evil plotted against them by Haman in the days of Esther and Mordecai.  Purim is celebrated on the 14th and 15th of Adar which occurs during February or March.  Below is a description of the festival from Smith’s Bible Dictionary.

“Pu´rim (lots), the annual festival instituted to commemorate the preservation of the Jews in Persia from the massacre with which they were threatened through the machinations of Haman. Esther 9. It was probably called Purim by the Jews in irony. Their great enemy Haman appears to have been very superstitious, and much given to casting lots. Esther 3:7. They gave the name Purim, or “Lots,” to the commemorative festival because he had thrown lots to ascertain what day would be auspicious for him to carry into effect the bloody decree which the king had issued at his instance. Esther 9:24. The festival lasted two days, and was regularly observed on the 14th and 15th of Adar. According to modern custom, as soon as the stars begin to appear, when the 14th of the month has commenced, candles are lighted up in token of rejoicing, and the people assemble in the synagogue. After a short prayer and thanksgiving, the reading of the book of Esther commences. The book is written in a peculiar manner, on a roll called “the Roll” (Megillah). When the reader comes to the name of Haman, the congregation cry out, “May his name be blotted out,” or, “Let the name of the ungodly perish.” When the Megillah is read through, the whole congregation exclaim, “Cursed be Haman; blessed be Mordecai; cursed be Zoresh (the wife of Haman); blessed be Esther; cursed be all idolaters; blessed be all Israelites, and blessed be Harbonah who hanged Haman.” In the morning service in the synagoguge, on the 14th, after the prayers, the passage is read from the law, Ex. 17:8-16, which relates the destruction of the Amalekites, the people of Agag, 1 Sam. 15:8, the supposed ancestor of Haman. Esther 3:1. The Megillah is then read again in the same manner. The 14th of Adar, as the very day of the deliverance of the Jews, is more solemnly kept than the 13th; but when the service in the synagogue is over, all gave themselves up to merry-making.”

Here For Such A Time As This

Do The Right Thing!