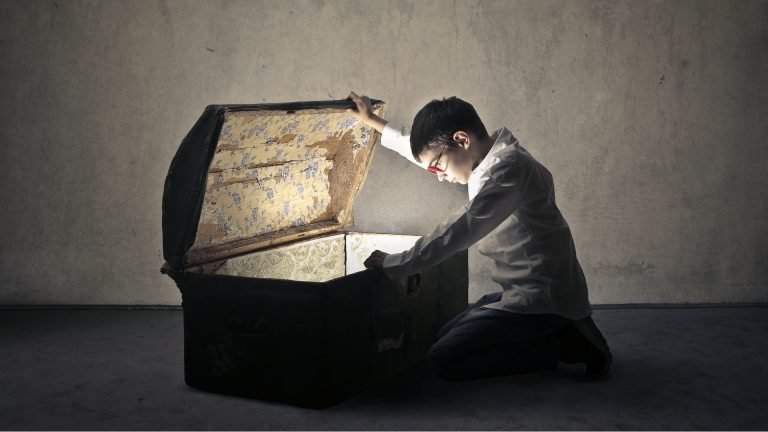 
Comparing the things of this world with those of Heaven is like comparing trinkets and treasure.

In today’s reading Zophar expresses the idea that the wicked may do well for a time but they will eventually suffer for their wickedness. Job points out that there are many examples of people that reject God living a wonderfully luxuriant life in which they never experience a bit of trouble. Again, these guys keep expecting blessings and curses based on worldly standards. They seem to have a minimal understanding of eternity. God’s greatest blessings are to be found in eternity, not in this perverted world. That does not mean that God won’t bless us in this world nor that He won’t punish us for wrong doing – He will.

I don’t discipline other people’s children and neither does God. I believe that if one lives contrary to the way God intended human beings to live, they will suffer the inevitable consequences of having done so. This is true in a spiritual and physical sense. God did not intend man to smoke. He did not construct man in such a way as to accommodate smoking. When we smoke, we do damage to our lungs. Any number of diseases can arise from smoking. If you are a smoker, and you develop one of these diseases, is it because God is punishing you? What if you smoked 5 packs of cigarettes a day for 60 years and never developed so much as a cough, did God bless you? I don’t think so.

God may choose to punish those that have rejected Him in this world or He may choose not to. They will face an eternal consequence, but that is of little comfort to those that wish to see the wicked punished and the good blessed NOW. It doesn’t work that way and we should not expect that it will. There are those in this world whom God chose before the foundations of the world to be His adopted children. The remaining human beings are not His adopted children but they are still His creation and as Creator He has every right to do with them as He pleases. He has every right to do as He pleases with you as well for that matter.

Jesus told the story of the fellow who found a treasure of great price in a field. That man reburied the treasure, ran and sold everything he had, and then bought that field. Everything he had once held precious was meaningless once he got a look at a real treasure. In Jesus Christ, you and I got a glimpse of that kind of treasure. Have we responded the same way? Have the riches of this world dimmed in our eyes? Are we willing to eagerly leave behind all we once held dear to purchase that eternal treasure beyond measure?

Brothers, let us not cling to the junk of our former, wasted lives. Let us let go of the trinkets and grab hold of the treasure! We already possess the greatest of treasures. Let’s start living like it!

Do You Know The Truth?

We Fall Down, We Get Back Up

This website uses cookies to improve your experience while you navigate through the website. Out of these, the cookies that are categorized as necessary are stored on your browser as they are essential for the working of basic functionalities of the website. We also use third-party cookies that help us analyze and understand how you use this website. These cookies will be stored in your browser only with your consent. You also have the option to opt-out of these cookies. But opting out of some of these cookies may affect your browsing experience.
Necessary Always Enabled
Necessary cookies are absolutely essential for the website to function properly. These cookies ensure basic functionalities and security features of the website, anonymously.
Functional
Functional cookies help to perform certain functionalities like sharing the content of the website on social media platforms, collect feedbacks, and other third-party features.
Performance
Performance cookies are used to understand and analyze the key performance indexes of the website which helps in delivering a better user experience for the visitors.
Analytics
Analytical cookies are used to understand how visitors interact with the website. These cookies help provide information on metrics the number of visitors, bounce rate, traffic source, etc.
Advertisement
Advertisement cookies are used to provide visitors with relevant ads and marketing campaigns. These cookies track visitors across websites and collect information to provide customized ads.
Others
Other uncategorized cookies are those that are being analyzed and have not been classified into a category as yet.
SAVE & ACCEPT
FacebookTwitterWhatsAppTelegram